Houston is a city of opportunity. But not everyone that comes to Houston is here for the opportunity. Some are here against their will. Some are here because the I-10 corridor between El Paso and Houston is one of the busiest sex trafficking routes in the whole United States. The myth of the ‘independent working girl’ lulls the public into thinking that prostitution is a choice. The truth is that only accounts for a small fraction of the commercialized sex industry.

Sex trafficking exists today because it is an extremely lucrative criminal enterprise. While guns or drugs can be sold once, humans can be sold over and over in just one night. Many organizations are fighting this global crisis on a number of fronts, but we chose to define and produce solutions for Houston on a very local level through three different tactics: deterrence, police investigation, and awareness.

Title: I. Deterrence, or “Johns Beware” Research has shown that “Johns” (sex buyers) would be most deterred if their actions were exposed to friends and family. That instinct for self preservation is exactly what we wanted to tap into with the first part of our strategy, “Johns Beware.”

Title: I. Deterrence, or “Johns Beware” [insert relevant ad graphics] Narrate: Backpage.com is a popular website similar to Craigslist, where the Houston PD has seen rampant posting of personal ads that act as an entry point for would-be sex buyers. The volume of ads per day in Houston alone is staggering. The first of our three tactics was to generate a “bot” that auto-posts fake ads that, when an interested John clicks on them, look like this. We’re redirecting sex buyers toward information about consequences of their actions. To automate this process, we’ve trained a markov-chain model capable of producing fake posts imitating real Backpage sex ads with common words and phrasing, even emojis. Finally, A-B testing of different click-through experiences will give us insight about which fake ads are the most effective in deterring Johns from following through on their initial interest in purchasing sex.

Caption: The scrape tool compiles a police database. Narrate: The scraper we built to crawl real Backpage sex ads advertising trafficking victims is simultaneously compiling content from the ads into a database available to Houston P.D. Our scraper is giving them photos, names, contact information and other text, in an organized, searchable fashion, so they have that information ready to use right now.

Title: II. Investigation, or “Front Page” Our second tactic that’s ready to go to work for HPD and other law enforcement is our fully functional Chrome extension.

Title: II. Investigation, or “Front Page” [insert logo/screencaps] Narrate: Houston law enforcement efforts focused on human trafficking could greatly benefit from crowdsourcing the generation of leads for investigation. Human trafficking operates in the shadows, which means these criminals are always on the move. We plan on enabling every person who installs this extension in their Chrome browser to be a source of data collection for suspect online activity. We’re gathering location, age, and phone number (if available). The extension then submits the data for compilation, after which it’s sent directly to local authorities for further investigation. We’re activating concerned individuals who are seeing concerning signs and want to act.

Title: III. Awareness, or “Geo-mapping” The scraped data allows us show illegal activity on online maps available to the public.

Title: III. Awareness, or “Geo-mapping” geo-mapping Narrate: Brothels, cantinas, and salons posing as legitimate businesses exist all around us. They are difficult for law enforcement to permanently eject because as soon as one storefront is successfully shut down, another steps in, and law enforcement has to start the process of investigation all over again. The general public can assist Houston P.D. by rallying to shut these businesses down permanently. Currently, we have an interactive map showing individual locations with business names, addresses, and the status of the business license, which is a common tip-off for so-called massage parlors. Users can filter the map to view trafficking in their own neighborhoods.

Title: We want to keep doing good work. [insert URL] Narrate: We showed up with an idea to address Human Trafficking in Houston, and in 24 hours we’ve built a lot that’s useful, but we can’t do more without your help. Please visit our website and keep checking #johnsbeware for updates about the project. We want to enable our police force; we want to enable citizens, like you, to help, and we want to make sure that all those who come to Houston can enjoy freedom and opportunity without fear of exploitation. Thank you. 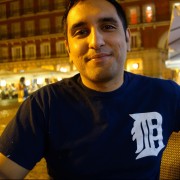