The Origin for Space Byte

On Friday evening at UGAHacks, three individual students from three different colleges would form a team to make a video game. We wanted to make a small, but addictive game similar to the classic arcade games or modern iPhone style. Early on, we decided on color-matching as the core gameplay mechanic due to its simple premise but broad use. There are hundreds of small, color-matching games on the Apple Store, and each one features a different orientation and a different set of required skills. We built the game into a mininmum viable product as quickly as possible, and then spent the rest of the 36 hours fine-tuning and tweaking the game to make it as smooth and satisfying an experience as it could possibly be. We didn't want to make a game that required you to beat three easy levels before reaching a point you could actually be challenged. We wanted to make a game that is fun from the start, and that is what we accomplished.

Space Bytes is made in C++. Entirely. It does not use any game engine, physics engine, or advanced game library. We imported SDL, a robust graphics library, and made everything else the game would use by hand. The game's many entities, from meteors to the satellite moons, to the short explosions that appear when a meteor is successfully destroyed, are all saved in objects. The game begins each frame by accepting user input, calling the Update method on each object, and then printing out each object with the Paste method. This simple design allows navigating the main class easier, despite its large size. Explosions, due to how common they are, are handled in an Explosion Manager, which holds the x, y, and timeLeft for every explosion, and handles all of them in its Update and Paste methods.

Space Byte includes a helpful array of powerup meteors, which fly twice as fast as regular meteors, and can be collected by any satellite. These powerups include:

Space Bytes, obviously, cameos Byte on the regular playing screen, who huddles over a laptop and emotes to the player's actions. This is so new players, who are unsure if the goal is to intercept or accept meteors, to immediately understand when something is a wrong move. To keep the arcade aesthetic, we wanted the game not to feature a tutorial and not to need one. This required us to invent efficient uses of our onscreen space for on-screen UI and nonverbal hints to help the player learn the game's mechanics, which I believe have helped give the Space Bytes the "instant pick-up-and-play" feel we aimed for the game to have, while not adding a burdensome tutorial level at the very beginning.

Space Bytes is a short, but action-packed color-matcher, with a simple idea and a lot of thought. The game includes speed, strategy, exhilarating moments, even progression, and even a final boss for those skillful enough to reach the last level. As a 36-hour game, Space Bytes is a strong entry in the game-making tradition, and a fantastic game. The Windows .exe binary of the modern stable release is hosted on github, and can be played at any time. 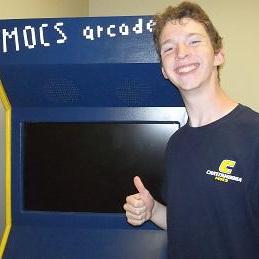