At first, we set out to create a public virtual graffiti platform, where users could draw virtual pictures anywhere and other users of the app would be able to see them exactly as the artist placed them. We traveled long on this path, perfecting the relations between global coordinates and their effect on 3D image transformations, before realizing that iOS's CoreLocation library was far too inaccurate for our vision.

Having spent three of five days toward this goal, we were left short on time and without a feasible way of achieving what we set out to accomplish. We decided unanimously to harness what we had already built and put it toward a new product rather than throw in the towel.

The result? GraffitiAir, an app that lets the user draw all around them as if they were completely surrounded by a canvas. It utilizes the spatial relationships between sets of global coordinates and their altitudes, as well as the device's accelerometer and gyroscope to keep images right where the user drew them as they pan their camera around.

We're excited to share what we've built with the other participants in this year's app challenge! 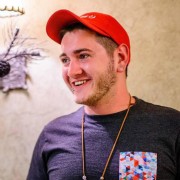