UMASS Lowell has a nationally diverse student body as well as faculty, which can lead to misunderstanding and frustration due to language barriers. After seeing how useful and successful Slack was implemented in the event, we got around to talking about how chat rooms could become multilingual, and how cool would it be if the chat sent from anyone in any language could be translated to a language chosen by the user automatically. This is the drive and purpose behind PolyChat; to allow a linguistically diverse group of people to communicate with each other with peace of mind knowing their message is being conveyed properly.

PolyChat either automatically detects a user's language using HPE's Language Detection API, or accepts a language option picked by the user and translates the message using Google's Translate API into the specified language. Additionally, our application uses HPE's Sentiment Analysis to determine the overall mood of a message, and displays it to the recipient in the form of an emoji.

Originally wanted speech to text, but we couldn't find a way to speed up the process, which took too long for it to be used as a real time feature. Also a delay in shorter messages due to parsing of API for possible language matches.

The web page was well designed, and the UI is user-friendly. Our application can automatically detect languages, and can display a positive or negative mood based on the language used. Also, we have a lot of languages available. Like, a lot. Thanks Google.

The mechanics of speech to text and text to speech API's, translation API's, and the functionality of a user-friendly chat room.

Performance fixes, and load times for translations need to be improved. Also a direct messaging system and private chat rooms, which goes in tandem with user accounts. 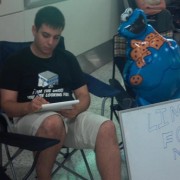 We added SSL support! Using letsencrypt we have valid certificates, and we redirect http to https automatically.