The idea came from a blog I used to help out with about surviving the apocalypse. The site was a blog, half serious, but also poked fun at the whole thing. This idea came from the main writer/editor. I made the translator. The blog was handed off to other owners but I kept the translator and over the years added to it bit by bit.

Based on the english that's typed it, it generates appropriate zombie speech. it saves everything you type in so you can translate phrases back a forth. There's a library of what we hope will be funny example phrases too. It run on the google app engine platform.

There were many, but one that surprised me was for a long time getting a random example phrase did not work well, I kept seeing the same one over and over. I'm still not 100% sure what I was doing wrong but I tired a different system and that worked well.

In a recent iteration I got the "translation" system using NLTK. That was cool

How to use google app engine. Bootstrap. A little bit of NLTK.

What's next for Zombie Translator

I'd like it use it as a place to experiment with new front end frameworks. Even if I don't actually end up using them it's a nice small problem that makes it easy to put something through it's paces.

I've been working with an artist to develop a comic based on the example phrases and eventually redesign the site. 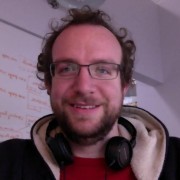