We didn't set the fire, but we'll put it out!

The frequency and severity of wildfires has unfortunately increased in recent years. Just last year, California saw a wildfire that burned nearly two million acres and killed almost 100 people. A large part of this is due to the difficulty of containing wildfires once they start. Firefighters must directly risk their lives and equipment to enter danger zones in order to create firebreaks, or gaps in vegetation and combustible materials.

We believe an effective way to suppress wildfires is to contain them by stopping them from crossing highways. Quench is a prototype of an autonomous system that is intended to drive along a road and intelligently spray water at burning areas, in order to create and preserve fire breaks along existing infrastructure.

Quench consists of a car that pulls a trailer. The trailer contains a camera, hose, water reservoir, and nozzle mounted on a pair of servos that support pan and tilt. The car can be controlled remotely or autonomously. As the car moves along, systems on the trailer continuously use computer vision to identify burning areas and spray water at areas that can best put out the fire.

The frame of the trailer is built from 80/20 aluminum, with key components mounted on.

All computer vision processing and control is done locally on a Raspberry Pi computer, so there is no dependency on continuous internet access. We make use of the OpenCV library to identify the fire.

In order to pull the trailer, we modified an RC car. We reverse engineered the remote control of the RC car so that the motors could instead be driven from a Raspberry Pi via a motor shield.

We're especially proud of our targeting system, and how it operates completely autonomously.

Quench is a small prototype, but we believe that this system can be scaled up to a practical car-sized vehicle that will help suppress wildfires and help prevent loss of life and property.

We hope Quench can scale up to a larger model that can be effective in fighting fires. 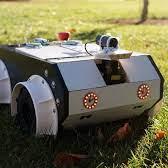