We realized that the world needed something more to help us manage our daily lives and bodies. Rather than what we've become used to today with our fitbits and other fitness trackers, VirtuaLife is the immersive augmented reality solution that provides all the fitness info we need at all times.

VirtuaLife is a HUD (Heads Up Display) that shows your health statistics in a beautiful fashion. It gives us vital information regarding our pulse, speed, and our fitness at all times so that we can monitor ourselves while we exercise without having to pull out your phone to check your stats.

This build consisted of two Google Cardboards, an iPhone, an Android, an Apple Watch, a Pebble and a dream. We used the phones to display two identical displays of a camera to create a stereoscopic effect. We then created a virtual overlay to display information taken from the Apple Watch and Pebble.

Some challenges we ran into were the lack of examples provided. As we started making this application, we quickly realized that we were one of the first to make an AR experience via Google cardboard, Apple Watch, and iPhone a reality.

Our biggest accomplishment was achieving what seemed to be nearly impossible for young students such as ourselves. Some parts seemed very impossible because firstly, the Apple Watch's new OS2 that we were using was still in beta and had no documentation about how to access the native health data. Second, we had to try to display two versions of the camera from the phone which isn't really done a lot and so we had to hack through tons of code to try to display two camera views on the screen.

The most important thing we learned was how to work as a team to create an application with technology we have never used before. 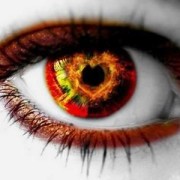