At the beginning of the hackathon we were consumed existential dread. We reflected about what brought joy and meaning to our life.

We decided to try to rediscover an aesthetic perspective from a simpler time. One not influenced by capitalist greed and trends motivated by consumerism.

We drew inspiration from the glitter pens that defined social status in the third grade. These writing instruments were the ultimate expression of aestheticism overcoming utilitarian ideals.

We decided to build every child's dream, a glitter cannon.

We scrape tweets to @uncommonglitter looking for keywords that trigger the glitter cannon.

We collected random pieces of trash, cut cans apart, and put tape on the cans. Also we sharpened a plastic fork. I don't know why we did most of that, but we ended up with a pretty dope glitter cannon. There was a method to the madness...somewhere.

None of us have experience with IRL engineering i.e. building physical systems.

Ed is proud of wining the celery eating contest. Jesse was bullied for being too good at soylent pong, and is pretty proud of it. Maggie got into grad school. Sam is still the same piece of trash that entered the hackathon.

Ed: Learned how much he doesn't know. Jesse: How ambivalent he is about soylent. Maggie: How to use Web APIs. Sam: Knives are dangerous. 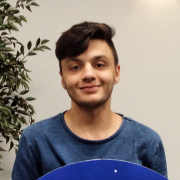