We were inspired to make this tool after realizing how big of an impact we could make in the space of accessible computing.

The tools that exist now to serve the blind and visually impaired market are extremely poor; we wanted to change that.

TypeAble is a custom iOS keyboard that makes typing on a mobile phone-- in any situation-- easy for the blind and visually impaired.

TypeAble is a custom iOS keyboard that can be installed through the App Store. It replaces your default keyboard layout and appears anytime you need to enter text within the operating system. The keyboards that exist on mobile phones today are meant for the sighted, not the blind. TypeAble prides itself in being built first and foremost for the blind and visually impaired.

To type a character, the user needs to first select a grouping of letters, then gesture to the letter they prefer. Navigating between letter groupings is easy: just apply more force with your finger. To select a letter, swipe in the direction of that letter. It's that simple. The layout is simple enough to pick up very quickly, so you can be typing like Mavis Beacon in no time. When you release your finger from the surface, your letter is inputted on the screen and optionally spoken aloud to you, so you can confirm your selections as you learn to use the keyboard.

We used Swift and the iOS SDK! We also ate a bunch of hoagies.

All of us on the team entered this weekend with absolutely no experience developing iOS apps (we're all web devs for the most part) so picking up the intricacies of Swift and XCode took a little bit of time. But for the most part, we were able to power through without too many hurdles.

We are utilizing Apple's cutting edge 3D-Touch interactions to empower an entire demographic on a platform in which they have normally been largely overlooked. We are all incredibly proud to be using this technology to help others!

We all learned a bunch this weekend. Besides everything about Swift & XCode, we also spent a bunch of time researching how blind people normally interact with mobile phones. It really made us realize how much we take for granted when interacting with technology.

What's next for typeAble

We want to add to the character set available & enhance the feedback that we provide the user when selecting characters. So far, we let the user select between every character in the alphabet and the top most used punctuation in the English language, but we would love to build on top of this foundation. Additionally, we provide haptic feedback when selecting options and even have the option for auditory feedback when selecting letters, but we all believe that there can be a lot of room for improvement in this area. Overall, we're hoping to polish up this keyboard over the semester and hopefully release it to the App Store. 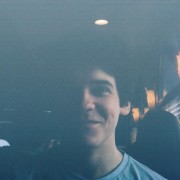