TwoSense is based on an Intel Edison board. It measures ambient temperature as the average across two temperature sensors for increased accuracy. It displays this on an LCD screen along with the optimal temperature. 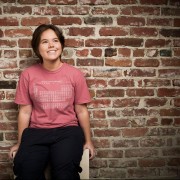