"They Are Watching" is a unique, in-person multiplayer game experience designed for the immersive nature of the Moverio.

At it's core, the game is a cross between "Space Team" and an MMO boss raid; a group of players -- all wearing Moverios -- work together to challenge a powerful monster, moving around in physical space to dodge the monster's attacks and flank it, while shouting to each other to communicate weak spots and opportunities that only some players can see at a time, and move into formations that have their own strengths and weaknesses.

Between battles, players can spend the "glory" they receive from defeating monsters on new weapons and skills through immersive 3D menus. Each battle's physical location is reported to the game's central servers, and clouds appear in the sky over locations with high activity, guiding visiting players to the real-world gathering spots of local players with whom they can join forces. As players progress in an area, the clouds part, revealing enormous, Zardoz-style stone heads floating in the sky, each of which confers special bonuses to players who battle in its domain, and increases the chances of specific loot drops from monsters in its domain. This encourages players to travel the world, seeking out players to join in epic battles, and organically building the community.

A steady stream of new monsters, skills, weapons, armors, and consumable items will keep players coming back to the game for years. 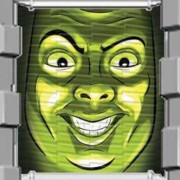