The most pressing issue of our time is Global Warming. The Global Warming crisis affects every single person in the world, that's 7,457,557,390 people and counting. Climate change already accounts for 300,000 deaths per year, and this number is expected to grow exponentially in the coming years. Experts tell us that to reduce or stop Global Warming humans have to bring down their carbon emissions by at least 70%. This creates a major problem because most of our power, which has become essential to humanity, comes from the burning of fossil fuels which release carbon emissions into the atmosphere. Since the world is becoming more and more power hungry, a paradox is created. How can we reduce our carbon emissions while supplying the world with increasing amounts of electricity? The answer lies in renewable energy sources. However, many people are skeptical to switch from the old ways. The main arguments against investing in renewable resources is that they require complex and expensive infrastructure and only work in specialized scenarios i.e: only when the sun is shining or when the wind is blowing. We set out to create a simple yet effect solution to this problem. We started thinking, "What is an unharnessed source of energy on our planet?" Our minds turned quickly to waves and the tide. The ocean makes up 71% of the Earth's surface and coast lines stretch for 372,000 miles; that's about 15 times the Earth's circumference. What if this enormous resource could be used to create renewable power?

Our device harnesses the immense power of the ocean. Ocean Motion converts the power of the ocean to electricity by utilizing a buoy attached with a rope to a generator setup. The unique design allows the Ocean Motion device to be oriented in a variety of ways, including: oscillating vertically, waves crashing on the shore horizontally, vertical tide motion, or the horizontal tidal current. In any position, we can convert the linear motion of waves to rotational motion, which is used to generate electricity! Our opposing-force tension system also allows every rotation to have a reaction rotation, which generates even more electricity! When the buoy reaches its maximum distance, the surgical tubing takes over and the wheel and generator are spun in a reverse direction, while the rope also becomes re-wound. This also creates energy in the generator! Because of the duality of this system, it can charge two apparati or conductors in the same interaction. In order to maximize the efficiency of our device, we have created a machine learning, data driven algorithm that determines whether our generator should be situated at the ground or at sea level, depending on what is the current situation.

Mechanical It was important that our product was simply designed, to stay cost-effective, easy to repair, and replicable. We created a wheel with multiple levels out of routered wood and a medium-sized gear. Using bolts and screws, we mounted the wheel and the generator to a flat surface, to minimize wasted energy due to friction. The surgical tubing was mounted on a screw off the wheel on the opposite side the twine rope was being pulled. We used everyday materials to prove that our design works efficiently, but isn't too complicated that it is expensive or difficult to mass-produce.

Software The Ocean Motion (names "m.o.e.c.d.l", after prototype v1) Learner was created in Wing IDE with Python 2.7. Using Excel Web Collection and Python Web Scraping Capabilities, we were able to pull data on tidal patterns and wave measurements to separate Excel Sheets. The Learner was able to take in dates and locations in order to mine the correct data from the sheets. The Learner then runs the data through custom algorithms to determine which setup would be most ideal for the Energy Waver

Electrical The rotational motion occurs in two directions, and we want to take advantage of both of them. So, using a simple breadboard circuit and some soldering, we created a parallel circuit with two diodes (in the form of L.E.D.s) that are wired in opposite orientations.

We had initial concerns as to how the wind-back mechanism would occur, as a linear to rotational motion conversion typically only allows one to harness half of the circle. We went through many different prototypes to determine the best way to get as much of the rotational motion as possible. The Learner's implementation into a Graphic User Interface was also a challenge, as it was our first time exposed to the tkinter library, which seemed to be the most efficient way to implement it. Therefore, we had to go through with the tkinter GUI.

We were very proud that we were able to get a dual-charging system that is stable, but simply designed and put-together. There are other renewable resources, but we believe that we were able to create a low-cost, easily implemented way for a large portion of the world to participate in the green-era. We were also very proud to have participated in our first-ever hackathon, and get through it on our own wit and adaptive thinking. link

We were able to effectively study tidal patterns to determine what lengths would be optimal for oscillation-based power. We also were able to learn how to effectively transform linear motion to rotational motion. In terms of software, we were able to study the tkinter library amongst other web mining techniques, and become exposed to new abilities We also learned to begin brainstorming literally as soon as possible. As in far before the event, as we did not begin gathering materials until the day before, and found ourselves making a few redundant trips to the Ace Hardware Store down the street. It was an amazing experience to be around so many experienced and intelligent people who have incredible. It truly was an inspiration.

What's next for test

The next step would be to make it at a larger scale to be able to last in deep water or rapid water environments.. We would also like to know the life-span of the device, and from that knowledge, expand the life-span. We also wanted to utilize the simplicity of the device, by breaking the apparatus down to core components and shipping them to homes across the world as kits. This would be the first DIY Renewable Energy Source that anyone (even two amateur high schoolers) could put together and benefit from. 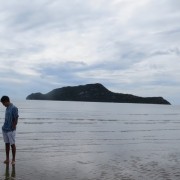