Like everyone else, we love the beautiful simplicity of on demand marketplace economics. Consumers get a better experience at a lower cost because the business maximizes the utilization of the top rated workers. Workers make less per job, but make more per hour because it's more complete utilization of their time (job after job after job come to the best workers).

We were originally trying to make an on demand fact-checking application (Chrome extension plugin that sat on your Facebook and Twitter experience and let you submit articles or memes to be fact-checked, where the information would then be instantly available in line for anyone else for whom that URL or image popped up in their article). But we had the same two problems that everyone building an on demand two sided marketplace (ODTSM) has: Building the technology and building the supply of workers to make the experience smooth by having a good result with a fast turn around time.

We wanted to do for ODTSM's what Magento and Shopify and other plug-and-play shopping cart solutions did for eCommerce: Open the industry up to anyone with a good idea that can provide a good service -- not just those with developer resources.

TaskUp solves those two major problems for anyone with an ODTSM will face:

First, instead of having to custom code the technology, you can launch your marketplace by just listing out the business logic rules you want to govern it.

Second, by allowing workers a central platform from which to manage a profile, we can do for ODTSM's what Medium did for content creation. Medium solves the time-to-value problem for content creators by coming with a built-in audience. TaskUp solves the time-to-value problem for customers of ODTSM's by coming with a built-in network of potential workers. Can an Uber driver also deliver food? Of course. If a barber has some down time, can they do tasks for an on demand premium research marketplace? Why not?

We built this app using rapid prototyping framework Meteor and MongoDB for the database. We split up the work between building out the template files and writing the backend functionality, stubbing in sample data with functional pieces throughout the day.

Building out the platform has a lot of potential options, so we had to think about the simplest implementation that scales to a number of markets. Stripping this down to its basic level of relationships was hard, particularly for a 60 second time slot.

The fact that we were able to build out a two-sided marketplace with sample categories and merchants, where reviews determine who gets to claim jobs in the fiture.

24 hours is not enough, but we've proved the concept of the app, and look forward to building this out fully, with more marketplace abstraction, business rules, and reporting.

In all seriousness, the tech exists now and it works. So we're going to try and get 1,000 startups to sign up around the world, and get at least 10 doing 100 transactions a week by the end of February. 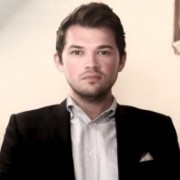