A 2D jump'n'jump (we're talking about a bunny with a pogo stick, so there's not much running involved) featuring a slightly suicidal bunny. Randomly throughout the game, suicide mode is triggered which inverts the death logic of the game.

This means the player has to deliberately jump into deadly traps to stay alive which is somewhat counter-intuitive :-)

All assets have been created on the fly and the music used has been composed and produced by FoxPopuli, who allowed me to use it for the project.

The Godot game engine was used in this project. I have been loosely following its development ever since it has been released under an open source license by Okam Studio but never found the time to actually build something with it. This is why I decided to try Godot in the course of this Hackathon and I really liked it! 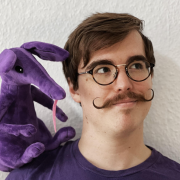