Back in August, Mica came across an HTML5 demo of static D3 force-directed graph and thought it might be a good option for developing a collaborative data science tool in Meteor. As chance would have it, Mica was searching Github for an un-related project a few days later and discovered CytoscapeJS. CytoscapeJS is a well-documented, robust library for network graphing.

We set up a Hackpad to brainstorm possible ways to divvy up the work. We attempted the "everything in smart package" approach. Look in the /packages directory.

We have an alpha that is reactive (albeit missing basic features and UI) and were able to do some preliminary testing with with dummy collections of 10,000+ nodes. In the coming weeks, we'll add the critical missing features that will actually make this useful.

Need to have a bigger supply of snacks for next time.

We have a lot planned. See Github README.md for more information. 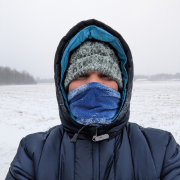