Twitch, a popular live streaming platform, has recently began deleting many videos from streamers on the platform due to copyrighted music being played in the background of the creators' streams. This is a huge problem for the platform, as these videos aren't often saved elsewhere, and

Our project is an extension built on the Twitch and Spotify APIs. It allows a streamer to play music from their Spotify account and have their viewers synchronize their Spotify playback to the streamer's. This way, a streamer can play music in the background of their stream while avoiding retroactive takedowns of their content. This also helps the artists whose music the streamers are playing by drastically increasing the amount of streams a song gets when the streamer plays it.

We built it using ReactJS for the Twitch extension, which communicates with an ExpressJS server that accesses a MongoDB store. The website for streamers to register their streams is pure HTML/CSS.

Learning new technologies while also on a time crunch is easily the most difficult part of any hackathon. Fully understanding the APIs that we need to use was also difficult, although we had small amounts of experience using them beforehand. Connecting our backend to our frontend took lots of effort as well. 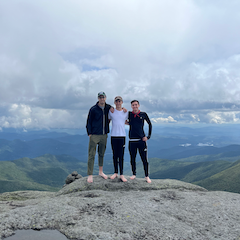