We believe memories are linked to spaces. Imagine you visit the liberty statue and would like to know where is the best place to take a picture or just look for friends that have been there before. It is nice to see friends pictures but it is nicer when you are in place and have an idea how their experience was.

You can take a picture with your phone and upload it to a server with your username. When on the hololens app, a query to the server is sent to request location. If new photos are found for the user the app shows the photos and ask to place them and save. If no photos the user can see other photos placed there by other people.

I did not complete the app but I got to have a 3D mapping of the space using SpaceMappingObserver and a request to bring photos uploaded to the server. Using "gaze and tap to place" gestures the pictures were placed on the space based on the geometry of the mesh. On the viewer mode the elements are randomly placed on the environment since we did not figure out a way to always place them in the same position since the origin point was always changing with every restart of the app.

The change of origin is a problem when the application starts you are at (0,0,0), so with every new start the origin changes. The gps was taken based on the SSID of the wireless and the mac address using google web services geolocation for this purpose is quite inaccurate but works to test the concept.

It was born as a very simple idea taken into consideration the examples from the HoloLens Academy and I ended up liking the idea a lot. I could do requests from HoloLens back and forth from my server that was cool, bringing external stuff into the environment.

I learned about Unity 5.5.0f looking at the integration with the HoloLens emulator made my day. I learned a lot from all the groups and really think all did a very good work.

What's next for SpaceBook

I think this can be a mobile app based on image features. However the interaction for placing an image from the phone would be more challenging than doing it with HoloLens. The app can be used as well to place notes on places of interest with directions or tips. We were thinking even to allow people to write handwritten notes from the phone and place them on the space. From the social component we would wanted to place comment on pictures uploaded by others. 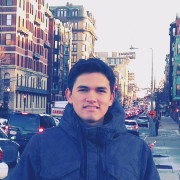