SoniDo generates an intensity mapping of sound in an area from microphone data. Deployed on Android, SoniDo begins recording sound and user location (latitude & longitude). It then runs basic Fourier analysis on the recorded sound and outputs amplitudes and frequencies to a DigitalOcean server powered by Apache & Flask (woohoo LAMP); the server uses the combined input of many different phones running the app to produce a map of sound intensity and color in the area. Noisy areas have varying dotted intensities and musical areas have colors and intensities that sync up. It could possibly be used to, for example, test the acoustical integrity of a concert hall. 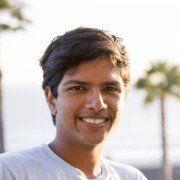