We believe that anonymity is truly revolutionizing the digital social world. Having anonymous posting and commenting eliminates the often competitive nature of social media that comes with followers, likes, and comments. We also believe that photo sharing should always be contextual and local not just to where you are, but also to where you have been.

Snap72 allows you to view, post, comment, and vote on photos completely anonymously. Snap72 tracks where you go in the background and lets you view photos around any place you have been in the last 72 hours. Additionally, you can post photos back to locations that you have visited in the last 72 hours. You can edit pictures to be “Meme” style and change the color, size, and layout of of the text you wish to display on the photo. Soon, you will be able to send direct messages to people whose photos interest you.

We build Snap72 using the Alohar SDK in order to capture location in the background with optimized battery and data usage. Snap72 will be available on both iOS and Android and the apps were built individually using completely native technologies, languages, and frameworks. The backend of the application was built on AWS and uses a combination of Lambda Cloud Compute Services, ElasticBeanstalk, S3, and DynamoDB No-SQL database.

The biggest challenge we ran into was time. We started Snap72 completely from scratch when the Alohar Mobile hackathon was announced just a couple of months ago. Our team has experience building apps on tight deadlines having worked with companies like StubHub, Apple, L’Oreal, and Shell in the past however designing, researching, building a backend, and 2 native applications in just a couple months was a difficult task. The other challenge we ran into was building a custom geo-query library that would optimally support finding photos in different locations as we supplied it with a users coordinates.

We are very proud of the overall user experience that we were able to provide from both a technology and design standpoint. The application functions well, is highly optimized, and provides usefulness. User experience is the most important aspect of any product we build and we feel that we have delivered a great experience with Snap72.

The biggest learn for our team was both the Alohar SDK. With Alohar Mobile, we were able to implement a highly optimized background location update system that can get the users location and contextual information without the need of us spending a ton of time building a custom solution.

What's next for Snap72

Soon Snap72 will have new features such as direct messaging, push notifications, and video support. 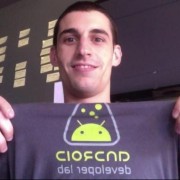