Initial description of your project

You are Yolanda Small, 21 years young and 9.5cm (or 3.7in) tall and one of the many inhabitants of Brevis Manor. The human tenants of the house are blissfully unaware of your existence.

Getting around the manor isn’t easy. Fortunately, the humans are in the habit of leaving all kinds of things around that can be repurposed into tools. But,it’s not safe either. Insects and mice might be nuisances to a human but to a Small… you can be either quick and quiet, or you are dead.

The core gameplay of Small is stealth & puzzle based exploration, with Zelda and Metroid games as an obvious inspiration. New tools give abilities to navigate previously inaccessible obstacles which in turn unlock new parts of the Manor to explore. The game itself is combat-free with “enemies” in the game requiring stealth, avoidance or clever use of tools rather than combat.

Scale and sense of wonder: The aesthetic of the game focuses heavily on the sense of scale given the player by VR. The world is made of objects,the size of which the player knows, but everything is ten times larger than it should be. This makes the ordinary appear epic in scale, and regular environments have a feeling of wonder to them. Also, animals at 10 times their usual size are pretty damn scary.

Low nausea one button controls: The game utilises a one button input method with no acceleration to allow the user to explore the environment in first person with minimal nausea. The restriction that the player must turn to face the direction they wish to move seems to greatly reduce nausea provided that movement speed is kept low enough. 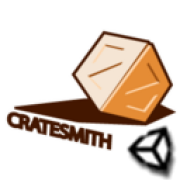 Currently planning how to approach the full production of Small, what other platforms it could come to and evaluating how to overcome technical limitations we encountered during the jam. Stay tuned as we'll have more news on this soon!