We sere inspired by the umd.io classes API to build an app to help people find new places!

Serendipity uses the Pebble.JS and Pebble C APIs in conjunction with the Google Directions API and the umd.io API or alternatively the Yelp API to pick a class that will be begin in the near future and direct the user by an arrow on the Pebble screen to the building that is in.

While umd.io shows great promise, it still is not without its share of issues. For example, it is not able to filter on time for class sections, which required us to implement (admittedly hacky) workarounds to essentially scrape the whole database. We had some trouble with geolocation, and math for easing animations is not easy!

For one thing, the difference between true and magnetic north is very important! We also learned a lot about the internals of the Pebble graphics stack in trying to optimize our usage.

What's next for Serendipity

We hope to improve how Serendipity decides which building to send users to, and as the umd.io API matures, it would be nice to support some of what is kind of hacky now in a more elegant way. We'd also like to incorporate Google Places and other class APIs from other institutions! 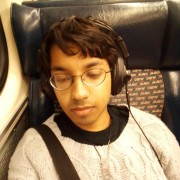