SaySomething An App that can change App developers thinking.

SaySomething is a break through IDEA, an ‘App’ that brings humans closer. It’s a thought about removing the language barrier around the Globe. SaySomething is kind of an App that not only listens to human voice or reads human voice, but also understand different languages and translate you in your language or the language of your choice. SaySomething being linguistic ‘App’, makes a Rhyming pattern in the news. It can read news, can reply you in any language and can help you in your interactions with people around the World. And most importantly having Cloud Integration of 'BOX' and ‘Appcelerator’, this is an App about which you would definitely want to say something. So have a look at the LIVE Videos and connect with someone you could not so far because of language barrier. 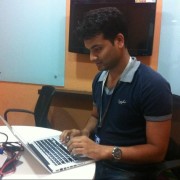