If a user of the product were to have a medical emergency, they could simply click the dash button to send an SMS message to their chosen contacts.

The site consists of 2 parts:

1) A scapy script sniffs the network that the dash button is connected to and watches for ARP packets from the dash button. It the captures that address and pings our API.

2) When our API receives a request, it will send a text message to the user's contacts using the Amazon SNS API. We also provide a simple web interface for users to manage their contacts and their information.

It is difficult to sniff packets on slow, high traffic networks where permissions are limited.

We only slept a total of 7 hours collectively during the hackathon. We also spent the first 20 hours working on a different project, but managed to successfully pivot and develop resque.me #agile #baylife

Soylent tastes like unbaked bread, and rocket league is the greatest game ever created.

The Amazon dash button consists of 2 main components: a small CPU and and 802.11 Broadcom wireless network adapter. There are schematics available online, but nobody has successfully modified the button to connect to a custom backend instead of Amazon's. We want to be the first.

After this, we will be able to disrupt the $100MM Emergency Medical Response Industry and achieve world domination :^) 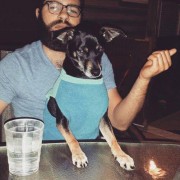