Built for Hack&Roll 2016 at School of Computing, National University of Singapore.

Today, the heart of political discussion has moved to the Internet and social media. While the mainstream media focusses on Twitter and Facebook - the most challenging conversations happen on Reddit. This project uses topic modelling to find what was big on Reddit's /r/politics in each month, allowing news junkies and political enthusiasts and strategists to get a handle on what is big in the Internet without having to dive into the murky depths of Reddit. 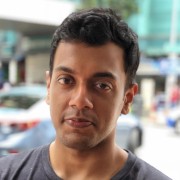