Living in Arlington, recycling isn't the most well known thing. I personally have no idea what is recyclable and what isn't, not to mention all the rules that go along with it. We wanted to help save the earth by educating the process of recycling and make a social competitive game out of it!

Take a pictures of an item to see if you can recycle it. It will explain the process to you if it is and even give you points. Points are used to earn awards and to complete with people around you and your friends.

We used Parse specifically because of the CloudCode functionality. This allowed us to have a custom endpoint on the server side to reach to our machine learning server.

We setup an ec2 instance and store all the images in a s3 bucket. The image is sent to https://www.clarifai.com/ and used its labels to train our own recycling dataset. The more pictures people take, the more it learns!

For the frontend we used iOS (Swift)

Figuring out how to classify recycling. We took a ton of pictures and manually classified them to find our own model. There really wasn't enough data to fully generate a great model and have a transport layer.

The iOS looks pretty cool, we actually finished, and the classifier works.

But the coolest part, its all real data and it's all legit. Yeah we had our "hacks" but this thing could be published pretty easily.

Train a better dataset and open more achievements and ways to show off and compete. 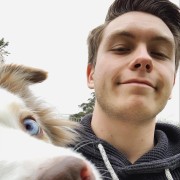