I was inspired to create Recyca-Tool as it helped solve a problem that I had experienced myself. A common reason people fail to recycle, including myself previously, is that they are either unaware of what to do in a particular situation or are too lazy to figure out whether they need to recycle or trash a certain item. Thus, I thought of an application that can capture an image of the item and tell the user what to do in real-time with the item.

Recyca-Tool lets the user capture a picture of a certain item that they want to throw out. The image is then sent into a convolutional neural network that categorically classifies the item that the user has shown. Based on this classification, the model determines what to do with the item. Using pyttsx3, the result of the model is spoken in a robotic voice.

The front end of the application was built using HTML and CSS. The backend was created using Flask, and I used TensorFlow and OpenCV to train a CNN and capture an image in real-time to predict.

A challenge I ran into was training a model with substantial accuracy, but I was eventually able to overcome this challenge and make a model with over 80% accuracy in classifying the item that the user wants to throw out.

I'm proud of being able to complete this project and implementing a voice using pyttsx3 to vocally say the result of the machine learning model. I'm also proud that this project helps solve a real problem and gives people greater incentive to recycle and help save the environment.

I learned how to implement OpenCV to help capture images in real-time to pass into a neural network. I also learned how to use pyttsx3 for text-to-speech conversion.

I would add a better quality camera to this application so that it can be set up in public areas in front of recycling bins and garbage bins. So, when a person is unaware of what to do with their item, they can hold it in front of the camera and be told what to do. This project helps save the environment and gives people greater incentive to recycle. 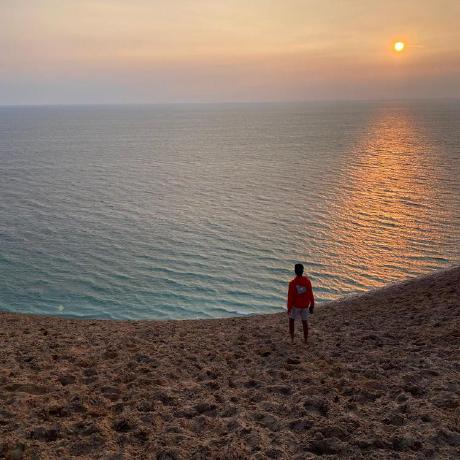