We're located: (Floor 6, table 7, on the corner where the balcony entrance door is)

"The physical plane, in emanationist metaphysics taught in Neoplatonism, Hermeticism, Hinduism, and Theosophy, refers to the visible reality of space and time, energy and matter"

As we subscribe ourselves to worlds created or altered in Virtual or Augmented Reality, we are leaving and redefining our current plane of reality. In this mode of transition, it will become important to explore how our existing bodies simultaneously interact with physical and virtual environments.

The Reality Plane begins to explore our interaction in Mixed Reality through added sensory cues in a familiar input device, a tablet.

Reality Plane presents a completely blank surface onto which information can be projected in mixed or virtual reality. It has the potential to support natural interactions (touching, sliding, pinching, et cetera) and provides haptic feedback for interactions. Developers can create their own experiences while users experience a more natural mode of interactions (as compared with air gestures or game controllers)

The orientation of the Reality Plane allows for different types of information to be displayed. In the demo game we created, when orientated horizontally a game map appears and displays the location of crystals to collect. Vertical orientation allows you to engage with the crystals that are floating in your environment. When you catch the crystals you simultaneously feel a buzz and hear the sound that each crystal emits.

Our demo game and tablet shows how it is possible to seamlessly integrate Arduino with Hololens, Vuforia and Unity to add tactile experience in addition to visual, audio, and motion.

We built a BLE library for unity from scratch, which took a long time to get working with consistency--it's already a great start but there's more to do

We had to design haptic tablet in multiple iterations and test it to create a balanced physical UX. The viewport scale of

Hololens creates a challenge in terms of designing the interaction between tablet, navigation and gestures that change the environment at any time.

Vuforia performance create a delay in the content movement, we designed in the interface to minimize its use.

One of our team members, Dale, had to drop out due to sickness. Feel better Dale!

What's next for Reality Plane 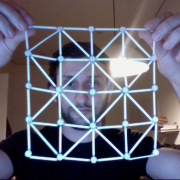