... and we can create a lemon potato:

It uses a machine learning / energy minimization algorithm (specifically, loopy belief propagation over a finite Markov field with a few heuristics) in order to a model a transposition of a texture onto another natural image.

Our web demo lets users take pictures from their webcams and retexture them using a number of default options.

tl;dr it copies the texture from one picture onto another

We wrote the entire algorithm from the ground-up in C++, including neighbor search data structures, energy minimization routines, and marshaling code. We compiled the C++ code using emscripten so that the entire algorithm can be ran in native asm.js JavaScript on the client side.

Based on the initial ideas presented by Efros and Freeman.

Debugging memory faults in emscripten compiled JavaScript is really hard! We had to write a light-weight version of Valgrind (and libVEX) to track down a few nasty bugs. The algorithm itself was also pretty tricky, requiring us to gain a little bit more mathematical knowledge than we had before.

It works! And we have some neat images that really show how everything works.

So, so much about low-level optimizations and image processing!

What's next for Quilty

Expanding it beyond just the client, doing video texture transfer. 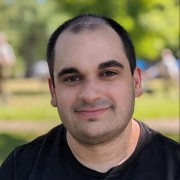