I really wanted to make a sort of stealthy game where you could avoid some enemies by sneaking past them instead of fighting. The idea of stealing bread seemed like a natural progression.

A poor peasant must avoid evil guards to find food

I used Unity as the Game Engine, which of course is a lot easier than trying to create anything this complex from scratch. I also used a tool called link which is a great tool for quickly creating fully skinned and rigged 3D characters. Its a great complement to the Unity Asset store.

Writing an entire video game in such a short time presented a lot of challenges.

First, getting models that looked okay with the animations I had available was a challenge. Additionally, most of my recent Game Dev work has been in Unreal Engine, which is another nice tool but does not easily support UWP Apps at present. So I've been trying to learn Unity to give me more flexibility. The tools are similar in functionality but very different in actual execution, so there was a huge learning curve to figuring out how to create some basic vision cones for the enemy characters, some basic AI routines, and even just processing when a character is caught or picks up an item (the bread.)

Additionally, the initial scope was a little too big...putting together all the animations and logic to actually SNEAK around was too time intensive, so the game is more about avoiding getting too close to guards than actively sneaking.

Finally, I wanted to fine tune the level a lot more, with some areas to jump over, more decorations, etc. Sadly, there wasn't time, so what I have is far from a finished, polished product.

I'm most proud that the game does actually run and work. I honestly didn't think I could get it all done in the time we had, especially when I ran in to some compile issues from the Unity project that I didn't fully understand. But it all worked out in the end and I've got a working game, even if it's not the most fun game in the world. ;-)

Unity is a great tool. Its very different from Unreal Engine, but using C# instead of C++ (as Unreal uses) is a breath of fresh air. I still have a lot more to learn about it, but I'll be spending more time with it soon.

What's next for Quest For Bread

The next step is refining the level with a more carefully thought out layout, guard positioning, and reward pickup positions. I'd like to add some traps in addition to just roaming guards, and a lot of visual tuning to get the look more polished. 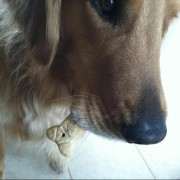