In a world where The Mighty Florbs are constantly running out of space fuel, an enterprising young fleeb took it upon herself to start the Human Simulator course, preparing young florbs for the inevitable - running out of gas on an alien planet.

You've crash landed on a planet called Erth. Your ship has reconfigured to blend in with the local population, and your task is to root around a common food supply depot and find suitable fuel for your ship. However, you must do so without raising suspicion from the depot clerk.

Walk around in your human suit, pick up objects and shove them into the suit's face-hole. Regain full power before you raise too much suspicion. 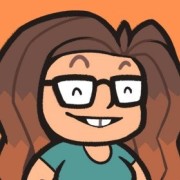