We have been inspired by lonely couch potatoes, viral reaction videos and vanity.

This app will work alongside a subscription service (e.g. Hulu, Netflix, Amazon Prime). The additions we felt would improve the current subscription service are a more specific, user engaging recommended show selection and a social environment within the service to compliment an often singular experience.

It provides users with a intelligent TV discovery process. After supplying an example of the kind of show they want to watch, users are met with a simple page displaying a gif advertising a show. They swipe left to dislike, down for already watched and right to like; these entries will calculate similar shows to show next based on genre, time scale, actors etc. To watch the show now, users can swipe up to send it to a device or watch it on their smart phone.

After the show finishes, reaction videos, pictures and comments will start to display on the screen. This not only keeps users active on the service but brings a social environment into a normally lonely one. Often one reaches to Netflix, Hulu etc. when alone and bored and after a compelling piece of television have nobody to discuss it with. The reactions from other users allow a sense of community. You can watch a show and follow not only the actors but the reactors as you go.

There will be options to capture the last 30 seconds of your viewing (sonically or visually) if you are aware of a good/funny reaction you had and can upload it to show to other users after they have watched the video. This idea stemmed from the increasing trend of viral reaction videos (some with over 10 million views).

Focusing the concept as a team tends to provide loads of different (great!) ideas. Such tight deadlines with a small team was also difficult.

How to spontaneously pitch an idea to a crowd. How to brainstorm within a new group of people.

What's next for Pom de Couch

POM DE WORLD DOMINATION!! (We're not sure, but we've thoroughly enjoyed today and would like to develop the idea further.) 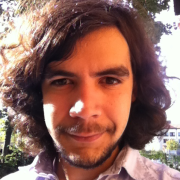