The intent behind PolyRhythm was to be able to create aesthetically pleasing visuals in a way that is more straightforward and streamlined then current market competitors. We first gained interest in creating this platform when we realized an innovation in an existing technology that allowed for web developers to tap into a technology that had not traditionally been utilized in this way before.

By using Chrome’s midi API, we were able to create stunning visuals in a language that we were familiar with and that is easier to understand and lower cost than other technologies in the market such as Serato, Mixvibes, and Arkaos. Using web technology also allowed us collaborate on visual and music performances that this technologies lack the capacity emulate.

In addition to taking input from midi, we were able to use websockets to be able control animations from a smartphone, tablet, or another midi controller (on another computer), very little to no latency. This also has allowed us to build more engaging interactions with audience members being providing a way for them to be able to interact with their favorite artist on stage, through their smart phones.

PolyRhythm has allowed us to create music and curate performances in ways that our musical predecessors could only have dreamed of.

The app is completely web-based therefore it is incredibly portable and can be set up anywhere seemlessly.

We used Node.js for the backend in addition with Sockets.io. The frontend used Two.js for the visuals and the rest was javascript/sass. 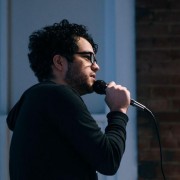 Filmed a short demo of the project after the hackathon