Download here A multi-player turn based VR board game. The player takes on the role of a selfish AI that has possessed a robot with the goal of leaving the dying starship it's trapped on via an escape pod. Problem is, the escape pod is out of power...

Parasite Transmission is a my attempt to make a turn based multi-player dungeon crawler in VR that can either be played to completion in a single session with friends or a play-by-notification style akin to "Draw Something". I really enjoy playing dungeon crawler games with friends, but as I've gotten older it's become more difficult to dedicate hours at a time to a single board game. I've wanted to be able to start a campaign with friend, and then "save it to the cloud". Then you could either continue the campaign a move at a time when you have a few moments. If multiple people are signed on at the same time then the game should be become more real time.

I also wanted to make the camera as comfortable as possible. I tried to accomplish this by having the player peer over a static board with pieces that move. Alternate viewpoints on the board are accomplished with a "security camera" mechanic that teleports your viewpoint down to the board.

Your task is to collect energy around the ship and use it to power up an escape pod. The only problem is there are other AI on the ship trying take the last remaining energy as well. You can chose to attack them, but you can't heal any damage. If you die, you re-spawn at the origin room losing all of the energy you have collected. If there isn't enough energy left on the ship to power the escape pod you lose the game. Fortunately, friends can join your game at any time to help you out.

Details: Fortunately, rooms frequently contain energy pods that you can drain on your way to the escape pod. Unfortunately, those rooms also contain enemy AI robots that are trying to compete for the same remaining energy supply. Before energy can be drained from an energy pods, it must be hacked so that the player's team can drain them. AI can also hack the energy the energy pods, taking possession away from your team.

Details: The most important design element to note is that each time a player moves all the enemy AI in the room get a move. Since there is no turn order between the players (i.e. anyone can submit a move whenever they want) you have to be careful about wandering off on your own and getting overwhelmed. However, this also means that you don't have to wait for your friend if they are taking too long to commit a move i.e. the game won't grind to halt if someone disappears on vacation.

Details: Since the star ship is dark and the enemy AI are trying to conserve power they can only see in a limited vision cone when they are stationary (when they move, they turn their vision cone off). They can spot players, other AI, and energy tanks if they pass through their vision cone while stationary. Different enemy AI have different abilities. Some can see better, some can move farther each turn, some can attack harder, and some can drain energy more efficiently, and some can heal other friendly AI. Since the player is controlling a hacked robot, they are subject to the same vision cone constraints. However, players can also see through security cameras to plan their moves and avoid detection. 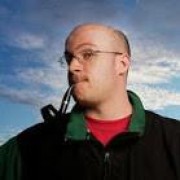