We've built a web app on which users can create and share bucket lists of a range of things including places to visit, films to watch, music artists to see live, restaurants and more. We pull data in from different APIs to help users search for things to add and also to provide them information about the things in their lists; google map locations, event listings etc.

It's built using primarily NodeJS, since we're using browserify on the front end too. We started by building an API using Expressjs and Sequelize and signed up for lots of API keys. Then we built the ReactJs web-app to use our API.

Tried to be too ambitious with the amount of api's we could fully implement into the application in the given time period.

We think we scoped it well. We finished a ship-able app, and it did basically all the things what we wanted it to do, without going over the time limit.

What's next for Pail Blue Sky

We'll deploy it somewhere. Just need an SSL certificate and a "prove you're not a robot" thing on registration and it's good to go. 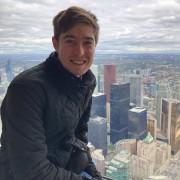