The idea to merge mobile and consoles comes from games that have attempted to do so, but in a weak way. Such as the GTA phone app. The apps are usually just add ons and don't add much to the overall experience. I wanted to combine both technologies, using their strengths to compliment each other. For instance relying on a gamepad for the platforming, this has been an area mobile games fall down. But then using the touch controls of a mobile to interact with the game world and puzzle.

It allows mobile gamers and PC gamers to connect together using their browsers. There is no need for third party applications to get started. Just share the URL and you can start playing with your friend anywhere in the world. I think being able to design game for mutliple control schemes could create some really unique experiences.

I developed the game using Construct 2 and the networking was handled by Photon Engine; a third party networking engine.

I believe an error possibly with the network or my system has caused mobile to desktop lag which makes playing the game difficult on a mobile phone. Network lag wasn't a problem earlier on in development so I need to look in to that.

As I was working solo, handling every aspect of development was quite a challenge, so being able to create something I am happy with has been great fun. I am particularly proud that I was able to sync two games together and create a seamless, unique multiplayer experience.

I learnt more about how networking works, which is something I have been wanting to work on for some time now.

What's next for One Way Ticket

I don't think I will be working too much more on the actual game. But I would like to develop the idea of multi platform multiplayer and creating new experiences between different platforms. 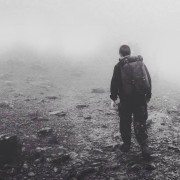