In todays political climate, when the discussion of social justice came about, we immediately thought of the many unfortunate incidents that end so horribly because of such impulsive actions. Despite the inherent dangers in policing, there are some far too willing to end up on the wrong side of the gun, or rather put others there, particularly persons of color. this game was partially an amazing journey to learn the immersive world of virtual reality, and a biting satire of those in society who would deny this phenomenon.

It open's the eyes to individuals who might not see racial prejudice's in today's world. It portrays a way of communicating with the police not everyone sees and to some extent, why. The idealized structure was for a police officer to pull over either a randomly selected white or black person, see routine processes biased from the law enforcement. it also featured a system of interacting with the inside of the vehicle with the leap motion technology, with the actual mechanics remaining the same, but under very different circumstances, i.e. the law enforcement gives the black person a much shorter fuse, and a more dangerous outcome.

We built our project on Unity 3D utilizing the Oculus Rift Virtual Reality features, as well as the Leap Motion Detector to create a immersive atmosphere for the user. We used C# and some Javascript for scripting, and the Unity Asset Store for Assets.

Hopefully we are able to add more content and fully realize the game, also hopefully accumulating to a release on steam! 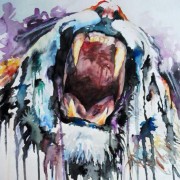