When I realised that the new .site domains would work with any adjective, I knew I had to snap up offensive.site.

The site uses Markov chains to generate silly insults, based on training data. The user repeatedly requests new insults, until they feel they have been insulted. At this point, the user is free the leave the site if they wish.

A client-side node script with embedded training data generates a JSON file containing the Markov chain. This file resides on my webserver, and an accompanying server-side node script can generate sentences from it. A jQuery script on the webpage makes requests to the node server via http://offensive.site/insult

Having never used node.js before, there were several impasses during development. Also, setting up multiple virtual hosts on an Apache server is made very difficult by Chrome's overzealous caching. 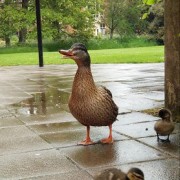