An open source, and competitive game where you cast spells and counter spells using a myo in order to defeat your friend

You can find a demo of the application at http://myozard-war.meteor.com.

Myozard War provides a new way of gaming where you have to use your myo to cast spell. Connect your Facebook or Twitter account and enter in the wonderful world of Myozard War. Challenge people online and cast spells. You can and you have to protect yourself too. You have to draw simples sharpes in the air to magically cast spells. There are Five « normal » spells which you can counter and one really special that you can’t avoid. So be careful and prepare yourself.

A little bit of backstory

Myozard came as an idea for the Warwick Hack in an attempt to revolutionize gaming. Long gone are the time of you playing on your mobile phone sitting in the train. Gaming is before all a way to make friends and to have fun with them. With Myozard War challenge your friends who have a Myo too. Your friend accept your invitation? Let's go for the GAME! Cast spell and no normal one. All the spells are original and come with sounds. So be ready to be surprised and don’t forget to protect yourself. Pinky promise, you will not regret it (at all). May the power of the sheep be with you.

Developed with Meteor JS and Myo.js, the application brings together two of the current coolest technologies to elevate game to a new level. A framework was developed specially for this game in order to recognize several shapes drawn by your arm. It could be used to recognize letters, basic geometric shapes.

Install with the following commands:

Then run the server with:

By visiting localhost:3000 in your preferred browser you can automatically run the application. 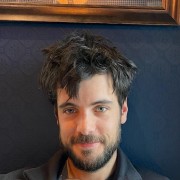