According to some news sources, today’s America is more polarized than ever before. More than ever, there is a need to break through what we call a ‘filter bubble,’ a circle of contacts and sources that people with strong opinions form around themselves, composed only of those who share similar views. This bubble can act as an echo chamber, simply reinforcing their views and making it near impossible for them to consider issues without bias. We hoped to leverage technology to help individuals break out of their bubbles, cooperate with those they otherwise would never have met, and gain a broader perspective on the world around them.

Processes user information, matches users with “complementary” others, and enables them to collaborate on volunteer projects to build rapport between them.

In order to match users, we consider the information we have about them to form a graph. Users will act as nodes in this graph; perhaps also pages and other objects that they have liked. We consider users that are clustered together; that is, in groups where vertices are densely interconnected, to have similar points of view on many issues. We look to match users with others that are outside of their cluster, but are still reachable along the edges of the graph over one or two degrees of separation. This way, we put together people who share some common connection or interest, but overall have very different world views.

Facebook’s authentication measures took a large chunk of time to fully understand. The Facebook graph API also has many endpoints with a confusing variety of possible usages. We also decided partway through, from a Node.js-centered MEAN stack to one revolving around PHP and MySQL, further complicating our efforts to fully leverage the Facebook APIs.

We spent a lot of time brainstorming how an app could possibly solve the issue of people not wanting to interact with those who have differing views. We learned a great deal about integrating with the data made available by the Facebook platform, and how we might utilize it in the future to further facilitate combating problems such as political polarization. 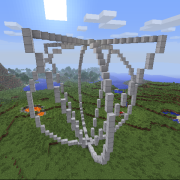