When's the last time you shot a 3D video? Likely never. There are two main reasons: there's no ubiquitous platform for watching 3D video, and there is no easy/affordable way to shoot 3D video. Oculus is doing a pretty good job creating a ubiquitous platform, but there is still no product that makes recording 3D video truly accessible to the average consumer. Until now.

Monocle is an iOS app that lets you network two iPhones, iPads, or iPod Touches together to quickly and easily shoot 3D video. You can forget about expensive cameras, 3D-printed mounts, and advanced video editing usually required to record 3D video -- just borrow a friend's iPhone and hold it next to yours. When you open Monocle on both devices, they will recognize each other, and you can simply press on either device's screen to record. Once you finish recording, the phones will compile the footage over a private peer-to-peer wifi connection, and store the new 3D video in your camera roll. The whole process takes a matter of seconds, and doesn't even require an internet connection. When you get home, you can watch your new footage on your Cardboard or Oculus Rift. 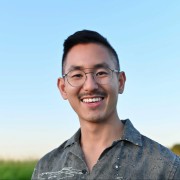