In the shadows uncertain economic times such as ours, the survival of the economy hinges on small businesses more than ever, encouraged by the modern entrepreneurial zeitgeist. Increasingly, we are seeing large bureaucratic organizations fail while their more nimble counterparts take their place as technology evens the playing field. But even thus, small teams are scant to afford the luxury that large multinationals have at their disposal in terms of efficiency in administrative chores. Small enterprises on a tight budget are hard pressed to devote considerable resources in the investment of a dedicated payroll service, just one of the many hurdles they face but among the most significant due to its sensitive nature and paramount role in dictating their long-term viability. This acutely identified growing market need has been adeptly addressed by MixPay, who present a refreshingly new way for small businesses to manage their finances.

Even then, MixPay not only simplifies payment between small organizations and their teammates. MixPay fosters trust, builds common goals and defines a shared narrative. MixPay streamlines and lubicrates over-bearing administrative financial tasks, allowing small businesses, startups and non-profits do what they do best - making a difference in this world.

And as among the pioneering enablers of this exciting new Fintech revolution, we are very glad that MixPay leads the way!

MixPay presents itself as a service of choice for small businesses on variable incomes to automate their payroll processing. MixPay tracks the payments from PayPal that an organization has received, and upon reaching a threshold will release a certain proportion of the common fund to team members. It is efficient, transparent, and easy to use. Employees will no longer need to wait for the end of the month before receiving their cheques; similarly businesses are able to adapt and adjust to varying financial situations immediately, allowing them to have greater flexibility over financial planning.

Interface designed with Semantic UI with HTML5, CSS3 and ES6. Backend was coded in Python 2 with Django 1.9.2, using PostgreSQL 9.4.8 as database.

Not everyone in the team knew all the libraries/tools that were used. Random errors that occurred. Server crashes. Not knowing why the API isn't working. Very obtuse API responses. Compatibility issues with our cloud provider.

An innovative panacea for small enterprises. Made progress at a decent pace. Did not freeze to death in the hacking room at night 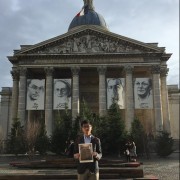