The goal of Mike Robot is to upgrade all objects to be smart objects through personal robotics.

Mike Robot recognizes intuitive gestures to control the movement of a robotic arm.

Mike uses a leap motion controller for motion capture. A nodejs client reads data from the sensor, and send it over the network to a NodeJS server on a raspberry Pi, which controls a robotic arm via USB. A 3D printed case is mounted to an RC car for locomotion.

High-fidelity motion control is intuitive and "feels" good - as though you are using "the force" to control an object. The motion capture is highly accurate and responsive.

How to combine different sensor inputs. How to 3D print custom parts.

What's next for Mike Robot

Upgrade all hardware components, including the mechanical arm and robotic base. Add "eyes" - a 3D sensor with object recognition so that interact automatically with real-world objects. 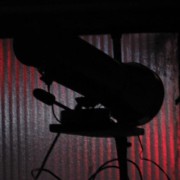