Both of us went to the women's march last month, and so it was on our minds' a few days ago as we were brainstorming. We kept coming back to the frustrations we felt during the march--especially when plans changed and no one seemed to be able to find out. Facebook events, where the march was organized, wouldn't load on the shoddy cell service. Calls were iffy.

The challenges at the Women's March led us to realize that there is a better way to protest. We call it MarchOn.

MarchOn is centered around a map. After users choose the march they're attending, the protest route and march events appear on the map. At the same time, there's a detailed list view next to the map. Organizers have the ability to push notifications to protesters, so that emergencies and changes of plan can be communicated instantly.

MarchOn has a "lite data" mode, which optimizes users' experiences for march conditions, when cell service is intermittent.

The map functionality was tricky—the licensing process in particular. Our vision for MarchOn is much too expansive for a hackathon. By far the biggest challenge we faced was in trimming our vision to fit the time constraints. Ultimately, we focused on fleshing out the app and the idea over the mechanics of the organizer-protester interaction.

Accordingly, the version of the app we're presenting is local. It doesn't use the backend server we wrote because we decided the more important part of the app was the user experience and basic functionality.

We're proudest of the maps functionality, especially the routes. For a small team, we did a lot of work. All told the project is composed of 2800 lines of code. (Some of it is generated, of course, but significantly less than half.) It was Shoya's first hackathon and Jack's second, so we're proud to have made something worth presenting.

The biggest lesson we learned was about scope. We have a three-page Google Doc full of ideas we'd like to add to MarchOn. We tried--and didn't always succeed--to make sure our goals were realistic. We'll both take from this experience better project management skills—we'll remember you've got to have a good reason to change plans.

What's next for March On

We hope to flesh out some of our ideas and get it working on a larger scale. We'd like to expand it to cover more than just protests, but any large event where plans might change on the fly.

We find the social aspect of protest particularly interesting. We'd like to allow protesters to communicate with each other and to share their passion and energy. 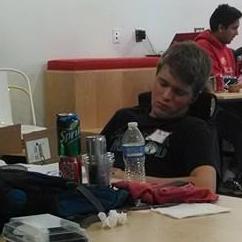