Please see our instruction video at https://share.vidyard.com/watch/TSBqY5q1EwTgkb9kwUJk6g or our Readme file in our file storage submission link for app installation instructions.

Attention-deficit/hyperactivity disorder (ADHD), as it sounds in the name, is a neurological disorder that makes it difficult for a person (especially children) to pay attention and control impulsive behaviors. The Centers for Disease Control and Prevention (CDC) reports that about 9.4 percent of children (6.1 million) in the U.S. between 2 to 17 years of age have ever been diagnosed with ADHD , based on data from the National Survey of Children's Health. (Melissa et el, 2018) According to Healthline, the average age of ADHD diagnosis is 7 years old. Symptoms of ADHD typically first appear between the ages of 3 and 6. ADHD isn't just a childhood disorder. About 4 percent of American adults over the age of 18 deal with ADHD on a daily basis.

Mandala Ball is a VR neurofeedback game designed to help pediatric ADHD patients control their ADHD symptoms. Mandala Ball is built around the idea of the “Mind has Power”. By giving the player the impression they have “telekinetic” powers, and tying the use of these powers to control of ADHD, we ensure that our game is an empowering experience for ADHD control training. Our proposed design for Mandala Ball accomplishes this via the following primary features:

*A computer controlled companion to provide instructions and social interaction.

*A variety of environment scenarios to match those most pediatric patients would find in real-life, with varying levels of difficulty.

*A secondary Dashboard program for providers and parents to track training progression across multiple gameplay sessions.

Due to time and technical expertise constraints, our Hackathon Demo contains a subset of the design features we envisioned for the overall app. We built a Unity-base app intended for use on the Oculus Quest. This Demo is built around a single session based on the Living Room scenario of our design concept. It contains the following prototype features:

Hand-tracking using the Microsoft Mixed Reality Toolkit. We used this handtracking to give the player the impression of having telekinesis by being able to manipulate objects from a distance.

Prototype Version of Mandala Ball Companion Our prototype of the Mandala ball uses a combination of visual design, Unity animations, and professional-grade voice acting to create a fun, encouraging companion.

Prototype Session: Our prototype session shows both the Relax and Selective Attention components of our proposed session design. The Relax component is demonstrated via a scripted concentration activity in which the Mandala Ball responds as if the player was concentrating in the manner needed for ADHD neurofeedback therapy. The Selection Attention component is demonstrated by a “Simon Says”-style game that the player can play via hand-tracking-based object manipulation. While EEG-based input is not live in this particular demo, these activities convey the look and feel of the sessions we would develop in a full version of Mandala Ball.

We had high initial turnover in our team, including most of our initial developer presence. In addition, we had to learn how to use hand-tracking frameworks on the Oculus Quest, build our own version of Simon Says utilizing 3-D object manipulation, and create scripting to control the mannerisms of our Mandala Ball companion.

We were able to develop a polished prototype demo that includes hand-tracking, professional grade activities, and a believable 3-D environment without trained developers.

We learned quite a bit about hand-tracking VR framework, and how to tune VR environments to best support hand-tracking activities. In addition, we learned a great deal about ADHD, how it's managed (particularly in the classroom), and how neurofeedback can be used to help control the condition.

What's next for Mandala Ball 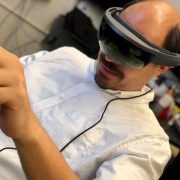