Saw a crazy git controller at HackLondon... Thought I can do crazier!

Using an Arduino and Vibration sensors to detect touch on the leaves. The Arduino acting as a HID device

That I can come up with crazy shit! and that I learned some stuff.

What's next for Macro Vera

Maybe keep the Aloe Vera, maybe try it again with a psychogalvanometer so it will actually works. 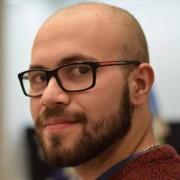