Nowadays most of the VR and AR application are for the personal users and does not have positioning feature that limiting peple on the chairs. So we want AR/VR become an universal accessible/service everywhere.

It locate user's position that project the virtual coordinate onto the real world, then users are able to the the virtual things just like they are in the real.

We used UWB module DWM1000 from DECAWAVE to build a positioning system. Then we put a webcam on the Oculus rift and use data from the DWM1000 through Unity.

Building a workable PCB board for DWM1000 module. Calibrating the RF module. Design positioning algorithm and integrate everyting together.

We are able to see the actual world from the oculus rift, and we are able to walk around and stare at a "MIKU" 3d model from different position/orientation

What's next for Long-range augmented reality 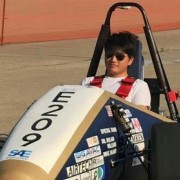