Control your spotify OSX desktop app with just a Leapmotion and some handy dandy hands! This app uses the Spotify API with AppleScript and the Node.js implementation of the Leapmotion API to allow an OSX user to do just that.

This project was built at HackUMass by Team 9.

Nothing to it. Just bring it into a directory and use npm install to install dependencies.

Command to run the program from the command line is node index.js

Swiping up and down trigger raising and lowering volume respectively. To move forward and backwards along playlists, use right swipe and left swipe. To toggle playing/pausing, use the screenTap gesture, which sort of operates like tapping on a phone. 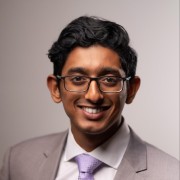