We first wanted to experiment with gesture recognition technology, and wanted to make a project to demonstrate it. So we came up with the idea that we can use gestures to, say, point a laser pointer during a presentation.

A lightweight motion capture system with two cameras that capture the motion of your finger. It then transmits the motion over the internet to a laser pointer. Which is calibrated to project your gesture on some flat screen.

For the motion capture system we used a few 80-20 aluminum pieces and two webcams. We used OpenCV for finger tip detection. On the other end we have a laser pointer module made up of servos and an arduino, able to be connected to a raspberry pi or a laptop. The module receives the detected finger tip over wifi and moves accordingly to project the gesture on the screen.

For the laser module, we spent quite some time working out the math for the calibration and projection onto any screen of varying sizes and distances due to awkward offsets in the angles.

We solved most of the challenges we ran into.

We learned how to connect two devices through a server/client model using sockets in python. We also learned how to use OpenCV for detecting things in a live feed. Lastly, we learned a lot of math. Projective geometry in particular (Trig).

Laser George is more than just a laser pointer. We were able to properly read our hand motion and reflect that on a system through the internet. The laser could be replaced with a variety of things, like security cameras, robotic arms, or (if our precision is even more fine-tuned) even a surgical laser! 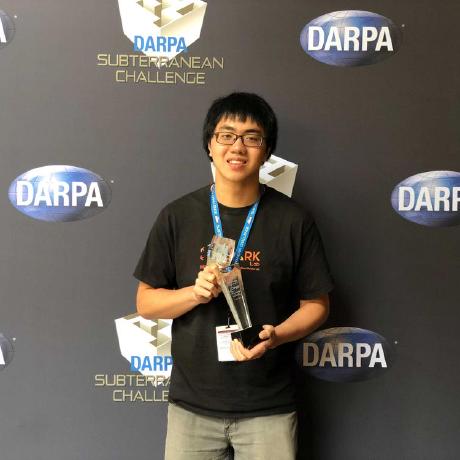