LaserBit is a system for duplicating standard Kwikset keys from a photo, cutting them on a laser cutter.

LaserBit is composed of two main components. The user-facing portion is the LaserBit iOS app, which uses an in-camera overlay and the device's gyroscope to ensure a quality photo that can be processed by the accompanying web API's custom image processing algorithm (powered by the Wolfram Language) to derive the key's so-called "bitting code", a sequence of five digits that describes the physical properties of a key that makes it different from other keys. Once the bitting code is determined, it is passed to the other part of LaserBit, a Wolfram Language script that generates a vector graphics file containing the sequence of cuts required to reproduce the key. This can be imported into CAD software to output it on a laser cutter.

Kwikset keys have notches on both sides of the blade to help guide them into locks. However, a laser cutter can only cut on one side at a time. I had to develop a technique for etching one side of the key and then flipping the medium over to etch the other side and cut out the key, all while keeping the medium in perfect registration.

I learned a lot about the mechanics and technicalities of laser cutting, and I gained experience with DraftSight, a 2D CAD program that was new to me. 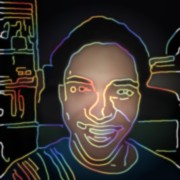