Combining a beautiful user interface and a sophisticated tweet generation engine, JoyRide makes it effortless to share your favorite BMW moments on social media. As you drive, our system generates tweets for you based on data collected from your car and phone. In a simple tinder-like interface, you choose which tweets to post and which to reject. Simply swipe right to tweet, left to ignore.

There are three core components to our creation:

The simplicity of the iPhone app combined with the power of the tweet generation engine lets you stay connected and enjoy your ride to the fullest. 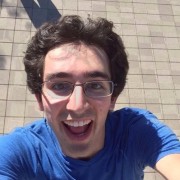